The Evolving Role of the CFO

Show more
The Evolving Role of the CFO History of the CFO Role The Traditional CFO Role
Topic 2, Lesson 4
In Progress
← Previous Next→ 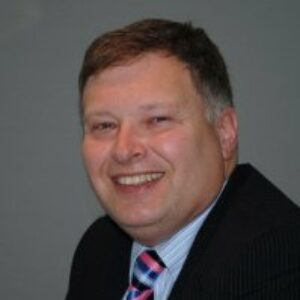 The CFO role has existed for many thousands of years and has been referred to by various job titles including Head of Finance, Finance Director, VP of Finance and Chief Financial Officer.  Many of these titles are still commonly used today and often vary depending upon geography, sector and type of company.

The historic finance leader role focused upon counting cash and went on to include basic accounting and bookkeeping in order to help owners understand their business performance.  Companies maintained minimal records and approaches varied significantly due to a lack of accounting standards and financial reporting requirements.

During the early 1900s, shareholders and investors performed basic non-statutory company audits to check for fraud and error, which contributed towards the introduction of basic compliance, accounting standards and financial reporting standards to ensure consistency.  The “Guardian” role rapidly expanded with new responsibilities across a range of areas including cash controls, PAYE/VAT and governance.

Towards the middle of the 1900s, the finance leader role evolved significantly across what is now known as “The four roles of the CFO”, starting with “Operator” responsibilities such as payroll, capital allocation and then accounting systems.

The responsibility for raising capital triggered the “Strategy” role around the 1930s, and soon evolved into a number of responsibilities including becoming a board member, producing management accounts and performing due diligence on potential acquisitions.

Around 1970, the “Change” role rapidly evolved from monitoring KPIs through to creating balanced scorecards, and by the 1990s included ERP implementations, outsourcing and change management responsibilities.

By around 1990, the Guardian/Operations responsibilities consumed around 75% of the finance leader’s time.  The following diagram illustrates the four emerging roles of the CFO and some examples of typical responsibilities by the year 1990: 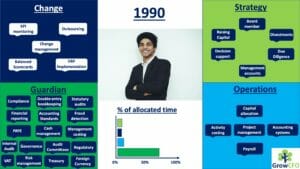